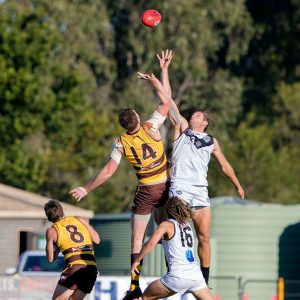 Bad kicking for goal has come back to haunt the Southport side after losing an epic NEAFL clash against Aspley on Saturday. The loss also sends us back to second place on the NEAFL ladder as the Sydney Swans take over on percentage.

The first quarter saw numerous opportunities wasted inside 50 and it took a Boston set shot on the quarter time siren to finally kick our first goal. Noa Corbett came off late in the term with concussion and would play no further part.

Aspley cleared out to a 25 point lead mid way through the second quarter before a pair of Tom Wilkinson goals kept us in the game. Two late Aspley goals reinstated the 25 point margin at half time.
We held Aspley to two goals in the third term but again poor conversion from our boys prevented us from making big inroads into the Aspley lead. Two goals seven behinds for the quarter saw us trailing by 19 at the last change.

We needed a lift from somewhere and Shawn Watson, in his first NEAFL game for the year, marked strongly in the goal square and goaled then repeated the dose two minutes later to have us within seven points. The last 15 minutes turned into a shootout between Southport’s Tom Wilkinson and Aspley’s Jono Freeman. Both players kicked two last quarter goals but Aspley led by five points at the 31 minute mark. Last week’s hero Brandon Chadwick then took a brilliant mark 50 meters from goal. The siren sounded and Chadwick had to kick the goal to win. He unloaded a drop punt which was on target, but fell just short of the goal line and Aspley claimed the four points.

NEXT GAME – ROUND 16
Southport vs Sydney University
Fankhauser Reserve, Southport