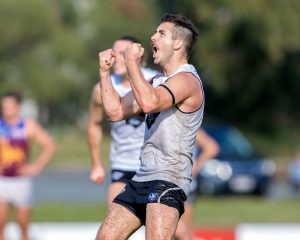 Southport have secured a finals berth for the first time since 2015 after a come from behind win over a loaded Brisbane Lions team at Fankhauser Reserve.

A very heavy ground greeted the Lions who rolled out 17 AFL listed players in what would be one of the best games of the NEAFL season. The Sharks dominated the first quarter however conversion was a major issue as we posted two goals and nine behinds.

Brisbane kicked to the scoring end in the second quarter but it took until the 13 minute mark for the Lions to post their first goal. Wilkinson steadied the ship but the Lions kicked two goals in the last seven minutes to reduce the half time margin to 11 points.

Despite kicking with the aid of the breeze in the third quarter, we were struggling to kick goals and the Lions had drawn level by the 14 minute mark. Johnson added our only major late in the term and we held a slender one point lead at the last change.

A stirring speech from Coach Steve Daniel, along with some midfield changes, had the Sharks poised to pull off an upset win. When Josh Hall left the field with concussion at the eight minute mark, the momentum swung Brisbane’s way.

Two goals in the space of three minutes saw the Lions clear out to a 14 point lead. We needed something special and Wilkinson delivered. He kicked two goals in four minutes and we were back in the game. Late inclusion Brandon Chadwick was then awarded a free kick at the 28 minute mark and calmly slotted the winning goal. This was a courageous victory!!