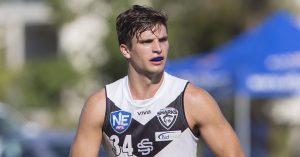 Southport Sharks have recorded their first win at Blacktown International Sports Park with a resounding 42 point win over arch rivals Sydney Uni. A much smoother preparation allowed the players to hit the ground running and open up a 27 point lead at quarter time. Lee Dale was the star with three opening term goals but the physical intent early in the game was evident. Fields, Sheers, Taylor, Clark and Tape were fierce in the contest and Uni had no match. Hall’s smother resulted in a goal for Dale and his own crumbing goal was also a highlight.

O’Shea goaled early in the second term but momentum swung towards Sydney Uni when their debutant Tom Redden took the Mark of the Year on Ryan Davis’ head. We started to turn the footy over by hand and foot and Uni were hanging tough. Somehow we managed to extend the lead by a goal.

Both sides traded goals during the third term but we were our own worst enemy for this part of the game. Charlie Ford missed a sitter, Davis gave away a 50m penalty and following a brilliant goal from Mutu, we started the next phase with 16 on the ground. Steve Daniel let the players know in no uncertain terms the effort during this term was poor.

We began the final term 27 points in front and extended the lead after some coast to coast footy which originated from best on ground Brodie Murdoch. Tom Fields got some reward for effort in his new forward role as his goal extended the lead past the 40 point mark.

All in all, a very satisfying win interstate against a quality side.

NEXT WEEK –ROUND 6
Southport vs NT Thunder
Saturday 11 May, 1.30pm
Fankhauser Reserve, Southport