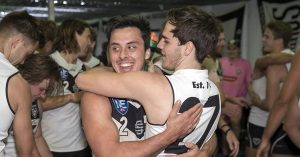 Southport have advanced to a second successive NEAFL Grand Final with a 30 point win over Aspley at Fankhauser Reserve yesterday.

The game started in warm and blustery conditions and Josh Hall gave us a glimpse of what was to come when he outmarked Gavin Grose early in the term. His subsequent goal was the only major kicked by either side for the term as both backlines dominated proceedings. Tape, Taylor and Murdoch were proving impassable as Aspley could only add two behinds for the quarter.

Hall again opened the second term with a huge mark in the goal square and his goal kick started the Sharks who then added goals through Johnson twice and Davis as the lead extended out to 30 points. Connor Stackelberg kicked Aspley’s first goal at the 26 minute mark of the term but the game seemed to be well within the Sharks control.

Aspley had other ideas though and opened the third term in blistering fashion. Two more goals to Connor Stackelberg and then another to Jono Freeman reduced the Sharks lead to only 12 points early in the term and it was game on. Hall again steadied the ship and then goals to Fields (2) and Stubbs re-established a 35 point lead.

The final quarter saw an inaccurate Sharks add two goals six for the term but Aspley could not significantly reduce the margin and ended up 30 points in arrears.

We may be starting as outsiders in the Grand Final against the Brisbane Lions, but we are going in with a healthy list that is in good form. Best of luck to our players and coaches this week as we strive to win our 24th Senior Premiership.