Tired Sharks get up in Thriller | Shark Tales Round 3 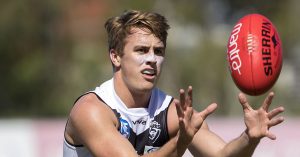 The Southport Sharks have managed to keep their unbeaten run alive with a six point win over the Canberra Demons in the nation’s capital. On a road trip where flight delays were common place, warm conditions greeted the boys at Phillip Oval in Canberra but despite the weather, it was the Demons who started better and dominated play in the first term.

Coupled with the loss of Cody Filewood to an ankle injury seven minutes in, alarm bells were ringing in the Sharks coaching box. The margin was reduced slightly during the second quarter but the skill errors that plagued us last week against Aspley were still very evident. Matt Shaw was dominating for the third week in succession but even he missed a shot that he could kick with his eyes closed. Many players were performing below par and Steve Daniel demanded a lift after half time. Canberra kicked the first goal of the third but Ford jagged one off the ground then Tom Fields landed a long bomb from 60 out to reduce the margin to three points.

Josh Williams was now rebounding brilliantly and a smother from Josh Hall resulted in the goal that gave us the lead. Mitch Johnson intercepted a Canberra kick out and goaled and then Tyler Roos kicked a classy goal after some brilliant forward half pressure. Six goals for the quarter.

We began the last quarter with a 12 point lead but that was eroded quickly as Canberra levelled the scores at the 13 minute mark. Some Charlie Ford magic resulted in a Manteit goal and a six point lead at the 20 minute mark. The final 14 minutes was a battle of territory as a draw looked the likely result on numerous occasions. A courageous effort from Sheers and plenty of disciplined defence from Miller helped secure a gutsy win.