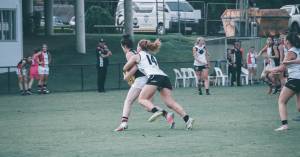 Despite unfurling our 2020 QFAW Division 1 Premiership Flag pre-game, the Southport Sharks were upset in Round 2 by traditional rivals Morningside.

Southport rolled out eight debutants but it was Morningside who walked away with the four points.

Blustery conditions greeted the teams at FankhauserReserve and the first quarter proved to be a battle of the defenses and scoring was scarce.

The second term opened with a comedy of errors as both sides kicked the ball the wrong way. Morningside kicked the first goal of the term but the Sharks were able to respond as Hannah Davies soccered through a goal from close range. Victoria Winstanley then snapped truly to put the Sharks in front just before halftime.

The light disappeared fast during the third term, as did the Sharks discipline. A string of free-kicks and 50 metre penalties cost the Sharks and Morningside duly capitalised. After a goal from Co-Captain Elli-Jay Beck, Morningside took control and then kicked three goals in succession to extend the lead to nine points, the largest of the game. A late goal to debutant Zali Cheffers reduced the lead to three points at three-quarter time.

The game was set up for a grandstand finish but the heavens opened on queue and made scoring virtually impossible. Southport dominated the territory battle into the wind but missed a couple of opportunities in the shocking conditions and were left to lament the lapses in discipline which eventually cost them the game.

The girls now look to make a comeback as they go head-to-head against the Burleigh Bombers this weekend – Saturday 8 May in Round 3.