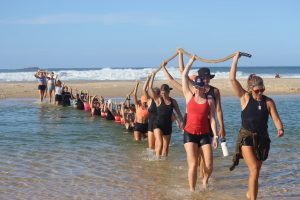 When the women won the QFAW Division 1 premiership last year, it made an excellent piece of history. Both the women and men team’s won premierships in their first year of existence.

The question now is, can the women do the same as what the men did back in 1962 and win back-to-back premierships?

“We are determined to go back-to-back. We have the hunger and the squad to do it. It’s quite a bit of a different side to what we had last year, but we still have the aspirations of getting there,” Davis said.

It was a bit of a later start to the pre-season this year with the Grand Final in late September, but the girls are certainly back into the swing of things now.

The highlight so far was the pre-season camp they went on over at North Stradbroke Island.

The girls were broken up into four teams – blue, pink, orange and camouflage, and competed in some team-building challenges over the weekend, ending with a game of barefoot bowls to declare the winner.

Some of the challenges included: relays, quizzes, beach activities and long runs. It was a fierce contest, but, in the end, there could only be one winner. The pink team!

Davis was incredibly proud of how the girls pushed themselves over the two days, saying the team is much tighter because of it.

He also said, “Their belief about how hard they can push themselves has grown immensely, which is exciting. There is a great vibe around the group, and I can’t wait for the games to get underway.”

The pre-season focus will continue to be adding layers to the game plan, and developing the girl’s skills, ready for the practice games, which are still to be confirmed.