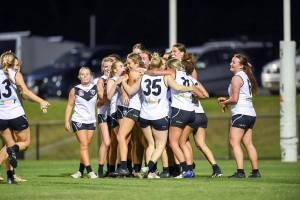 Southport takes on Surfers Paradise for the second year in a row in the QFAW Division 1 Grand Final.

Last year, it was Southport who were able to win by 5 points. But who will it be this year?

Southport lost in their first game of the year against Morningside but have been undefeated for the remainder of the season.

The last time these sides met it was in Round 12 at Surfers Paradise. The Sharks winning by 9 points.

Southport’s coach Ryan Davis said during the week that he and the club are excited going into the weekend.

“We are really looking forward to get out there. Surfers are a quality outfit, so it’s going to be tough. But if we all play our roles and play our team game, then I believe we can get the job done.”

The game will be played at 2:30pm on Sunday Afternoon at Bond University. Entry is $6 for adults, $4 for concession and FREE for children under the age of 16. Parking is $5 per car.