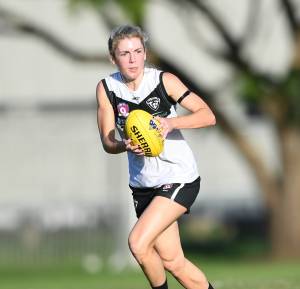 Southport lost their first game of the year in the QAFLW Seniors after reigning premiers UQ were too good for them on Saturday.

After the game, Southport Coach Ryan Davis said, “UQ is a tremendous side and the competition’s benchmark. We were excited to see where we were as a football club, but unfortunately, we didn’t measure up on the weekend.”

UQ kicked three goals to zero in the first quarter, and from there, the Sharks were playing catch up.

Davis said, “It stings a bit because they beat us at our own game – contest and pressure. You cannot give them any leeway and we did, which put us on our heels.”

Davis is confident that this is just a speed bump and that there are plenty of great lessons to learn from the game.

He said, “It’s great to see where we need to improve. We need to learn how to absorb the pressure that UQ put us under for a long time.”

“We will review it, learn our lessons and move on. It’s a long season, and we won’t let this derail our season.”

The side does not have long to dwell on the loss as the team will play their postponed Round 7 game against Yeronga on Wednesday Night at Leyshon Park.

“We are looking forward to Wednesday night and making amends for this weekend’s performance.”

The Southport Sharks started off the triple-header at the Austworld Centre in emphatic fashion defeating UQ by 29 points on Saturday Morning.

Southport Coach Mal Smith said, “We were so excited to be back playing footy after an interrupted month due to the weather, and I think it showed by how the girls played.”

The Sharks started exceptionally well, kicking two early goals, which set the tone for the rest of the game.

UQ won the second quarter and only trailed by five points at halftime, but Southport lifted in the second half, kicking five goals to two for the remainder of the game.

It was an important win for the Sharks, who are now third on the ladder.

Bree McFarlane was exceptional in the second half kicking three goals, and Kaylee Kimber proved her class, especially when she played in the middle.

16-year-old Avalon Pearce continued to show her immense talent as she once again played very well in the ruck.

It is a short turnaround for the team as they take on Yeronga on Wednesday Night for the postponed Round 7 game at Leyshon Park.

The Sharks will be looking for revenge as they lost to Yeronga in Round 1.