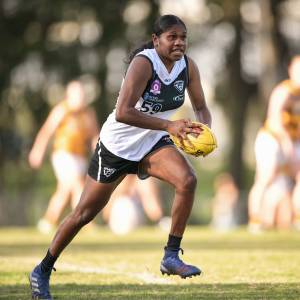 The Southport Sharks’ undefeated start in their inaugural season in the QAFLW Seniors continued after they beat the Aspley Hornets by 60 points on the weekend.

Southport Coach Ryan Davis knew it would be a physical game and asked his players before the game to be ready to go hard at the contest.

He said, “Aspley is very good at winning the ball at the contest. So, we wanted to beat them in that area and get the ball going our way.”

The Sharks did a great job of that early, but they couldn’t capitalise on the scoreboard, kicking two goals and five behinds in the opening quarter.

Aspley kicked two late first quarter goals, so despite the Sharks having all the ball in their half of the ground in the opening term, the Sharks only led by 5 points at Quarter Time.

Davis’ message at quarter time was not to panic and keep to the game plan.

The Sharks kept winning the contest and getting the ball forward in the second quarter as they did in the first quarter. However, this time the ball kept sailing through the big sticks.

Southport led by 35 points at Half Time and kicked the opening goal of the third quarter to extend the lead.

Aspley got on top in the middle and kicked three of the other four goals in the quarter, including a goal very late in the third quarter.

Davis said he was disappointed that his side conceded late goals; however, he was proud of how the team responded when Aspley challenged them.

He said, “I’m proud of how we responded because it is so hard to halt a team when they have momentum. So, to see us do that was pleasing.”

In defence, Tatum Shaw and Lily McDonald also played very well. Davis said, “Lily and Tatum did a great job forcing turnovers and sending the ball back, which was key for winning the territory battle and winning the game.”

The top of the table Sharks has a bye this week before taking on Yeronga at home next Saturday.

The Southport Sharks QAFLW Reserves have won back-to-back games after defeating Aspley by 60 points on Saturday.

After the game, Southport Coach Mal Smith said, “It was a terrific four-quarter performance and a great reward for effort.”

The Sharks started well, kicking away to a two-goal lead in the first quarter and were able to continue extending that lead throughout the game.

Before the game, Smith asked his players to play attacking football and take the game on, and he was pleased with how the girls did that.

“We did exactly what we wanted to do. Attack the contest and win the ball forward. It was fantastic!”

Southport’s defence was solid, only conceding two goals. Jade Struhs and Avalon Pearce led the way with their ability to get the ball out of the Shark’s defensive fifty.

Haze-Lee Martin led the way in the middle, and up forward, Georgia Eller, Taylor Gregory, and Maggie O’Connell were a handful for Aspley kicking three goals each.

It was a team performance, though, with everyone playing their role in the victory.

This week, the fourth-placed Sharks have a bye before taking on Yeronga at home, which is a massive game in the context of the season.