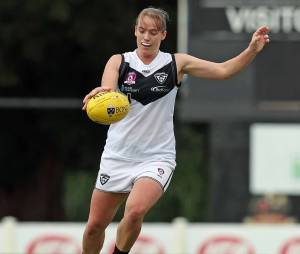 Southport remains undefeated in the QAFLW after defeating Wilston Grange by 80 points on Saturday Afternoon.

After the game, Southport Coach Ryan Davis said, “It was a tough and gritty game”, despite winning by more than ten goals.

“Wilston Grange is a high-pressure side, and they brought heat around the contest for the game’s entirety.”

“I think in the end, though, it was our ability to surge the ball forward every time we got the ball that broke the game open because it meant we were able to get the ball inside 50, and our forwards were able to capitalise.”

Maggie O’Connell backed her goal on debut with another two goals, the 18-year-old showing she has an excellent nous for kicking goals.

Another youngster who continues to improve and has immense potential is Ruckman – Lilly Pearce.

Pearce also kicked a goal, gave her midfielders first use of the ball and was great around the ground.

It was a complete team performance by Southport who will host third placed Aspley at home on Saturday Afternoon.

The Southport Sharks defeated Wilston Grange by 127 points on Saturday Afternoon in the QAFLW Reserves, winning 18.19 (127) to 0.

After the game, Southport Coach Mal Smith said, “I’m so happy for the girls. Seeing the smile on their face after the game was so good to see. That’s why we do what we do.”

The girl with the biggest smile was Alessia Smythe. She came back for her first game from an ACL injury and kicked four goals.

Captain for the day Taylor Gregory, kicked three goals and has showed a great attitude since coming into the Reserves team from the seniors.

“It is so good to see the girls who come back from the senior team play well. It is tough to come back to the Reserves team, but Taylor has had a fantastic attitude, and her football attributes to that.”

Ella Williams also played in the Reserves this week after a couple of games in the seniors and played well on the wing.

In the midfield, Tasmin Perry and Lilly Munro did very well at winning the ball at the contest and getting the ball forward.

Overall, it was a great day for the team. Smith said, “we wanted to play attacking football, attack the contest, and pressure the opposition. The most pleasing is we were able to do that.”

Southport is now fourth on the QAFLW Reserves ladder and takes on Aspley at home at 4pm this week.