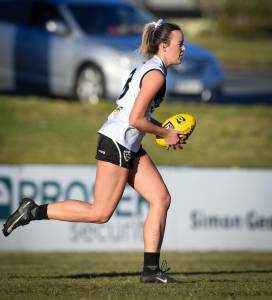 The Maroochydore Roos have defeated the Southport Sharks by 16 points on Saturday Afternoon.

After the match, Southport Coach Ryan Davis said, “It was disappointing to get jumped like that.”

“We were playing catch-up footy for the remainder. We have been jumped in both of our losses, so that is something we might need to investigate.”

Trailing by 23 points at Half Time, Southport were much improved in the second half.

The Sharks were able to cut the lead back to 10 points midway through the third quarter.

“Our third quarter resurgence was good, but we had too many mistakes and errors which cost us,” Davis said.

Maroochydore kicked a goal late in the third quarter and another early in the last quarter to put the game out of reach.

Capitalising from their Inside 50s is an area the Sharks will be looking to improve as they had seven more Inside 50s than the Roos for the game.

Davis said, “We will look at the vision and see how we can improve.”

“Then we will train hard and refocus to try to get the four points this week.”

This Saturday, Southport will travel to Brisbane to play Aspley at Graham Road at 4:45pm.

The Southport Sharks remain on top of the ladder after defeating Maroochydore Roos by three points in a game of two halves.

It was a tense last quarter, but once again, the Sharks’ defence stood firm and did not let Maroochydore get in front.

Southport Coach Mal Smith said, “It was a tremendous effort. It is disappointing that we dropped away in the second half, but I’m proud of the girls we were able to hold on to the lead.”

There were plenty of contributors to the victory. Tatum Shaw, Zali Cheffers, Paige Price and Zoe Haines kicked a goal each.

This Saturday, Southport travel to Graham Road to take on Aspley at 6:45pm.