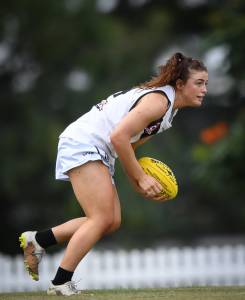 The Southport Sharks have won their first ever QAFLW game, defeating Yeronga by 43 points at Leyshon Park on Saturday.

The Sharks got off to a flying start kicking two goals to zero in the first quarter and were able to keep the momentum going to win 8.3 (51) to 1.2 (8).

There was a little stall in momentum after halftime, but Southport got back to what they are best at, winning the ball at the contest.

Britt Perry showed her star power, kicking four goals in her first game for the Sharks.

Georgia Breward and Maddie Watt led the way in the middle against a strong Yeronga midfield.

Coach Ryan Davis was proud of his team’s effort on a historic day for the club.

Davis revealed, “before the game, I wanted us to just focus on our processes, and let the rest take care of itself, but afterwards I harped on the significance of the day.”

Over the pre-season, there have been plenty of challenges for the Sharks women’s program, stepping up into the QAFLW and going from one team to two teams.

Davis’ philosophy though, has been to embrace the challenges and play the Sharks way.

Davis explained, “We have a strong culture and values at Southport. So, no matter whether the girls have been playing with the Suns or Suns Academy or come from other clubs, when they pull on the Sharks jumper, they are a Shark.”

“Today, I was so proud of how they all bought in and played the Sharks way,” Davis said.

Next week is another historic day for the club, as the Southport Sharks will be hosting a triple header at Fankhauser Reserve for the first time.

Davis said, “It will be a great day for the footy club. It’s very historic, and we are all looking forward to it.”

To see the fixture and results of the QAFLW click here

The QAFLW Reserves put up a gallant fight against Yeronga but ultimately went down by 30 points at Leyshon Park on Saturday Afternoon after the senior game.

Yeronga started the game well, kicking the first two goals, but the Sharks were able to kick a goal late in the first quarter and headed into the first break with some momentum.

That momentum was short lived, though, as the hosts kicked three goals to zero in the second term.

The Sharks were much improved in the second half, losing the half by only 2 points.

Reserves Coach Mal Smith said, “we didn’t get the result today. However, I walk away proud of the girls, especially with their second half.”

What impressed Smith the most was how his team bought into the team culture.

“We haven’t played much together as a team, but today I think we were all able to see how we wanted to play, and I was impressed with how every bought in.”

It will be hard to break into a winning senior side, but the Sharks showed they have plenty of depth in their squad, and several girls have put their hand up for senior selection.

Leading the way were youngsters Darcie Davies, Kaylee Kimber and Caitlin Miller, all showing their talent in the midfield.

There was a spread of goal kickers. The goal kickers were Avalon Pearce who played in almost every position, Captain of the Day Maggie O’Connell, Kaylee Kimber and Indira Maradani.