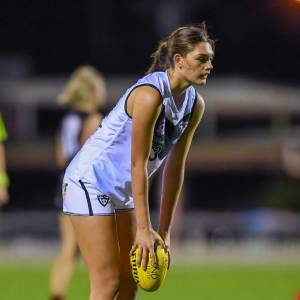 The Southport Sharks are back on top of the QAFLW after solid victories over Yeronga and Wilston Grange.

It’s been a challenging week for the Sharks as they played three games in seven days to catch up on their Round 7 postponed game against Yeronga.

Southport Coach Ryan Davis said, “It has been a massive week for the girls, but I am proud of how they handled it.

“Of course, we would’ve liked 12 points, but I am happy with how we responded after losing against UQ at the start of the week.”

Against Yeronga,  Darcie Davies kicked five goals in her senior debut and Poppy Boltz had 35 disposals in the 11.10 (76) to 0.2 (2) victory in the Wednesday Night game at Yeronga.

“In the end the mid-week trip to Brisbane was a great team building exercise and the perfect way to get back on our feet after losing our first game of the year,” Davis said.

The midfield led the way, with Jess Brock playing well in the ruck and Poppy Boltz winning plenty of football again with 29 disposals.

Up forward, Britt Perry kicked four goals in her last game for the Sharks, as she has been traded from the Gold Coast Suns AFLW team to the Port Adelaide AFLW team.

Davis said, “We wish Britt all the best at Port Adelaide. She has been terrific for us on and off the field.”

This week, Southport plays Maroochydore on a massive day for the club.

The Southport Sharks will be hosting a triple header at Fankhauser Reserve to celebrate the club’s “Heritage Day”.

The QAFLW Seniors will be playing at 3:00 pm.

The Southport Sharks have won three games in seven days to take top spot on the QAFLW Reserves ladder.

This comes on the back of a seven point win over Yeronga during the week on Wednesday night to catch up on the postponed Round 7 game and a 75 point win over Wilston Grange.

Southport Coach Mal Smith couldn’t be prouder of the girls.

“They are a resilient bunch,” he said.

“They never complain, always have fun, work hard and do their best. That’s all I can ask!”

“It was a tough old game. Yeronga put us under the pump with their pressure, but I am so pleased we could withstand it.”

Neither team were able to score a goal in the second half, which made it a very tense last quarter.

“It wasn’t the prettiest game of football, but we were able to get the four points which was exactly what we went up there to do.”

Maggie O’Connell was the stand out in what was an excellent team performance with seven goals.

The Sharks are now on top of the ladder, but Smith is adamant they won’t let that get to their head.

“We play Maroochydore this week, who in Round 3 beat us by 45 points, so I can ensure you we will not be getting ahead of ourselves and take each week as it comes.”

It will be a great day for the Southport Sharks, hosting a triple header at Fankhauser Reserve and celebrating “Heritage Day”.

The QAFLW Reserves will be playing at 5 pm.