PANTHERS NO MATCH THIS TIME 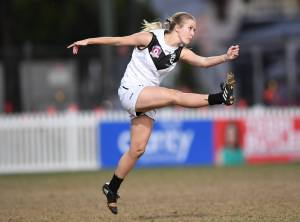 The Southport QFAW team have extracted revenge for their Round 2 defeat by grinding out an eight-point win over Morningside on Saturday. Windy conditions were again prevalent and we were destined for another low scoring affair. The first quarter was very contested but Hannah Davies pounced on a loose ball to give the Sharks a five-point quarter-time lead.

Zoe Haines brought some extreme tackling pressure and this eventually led to a long-range goal from Madi Reisinger. Morningside answered though and the halftime lead was back to three points. The sharks lifted their intensity in the third term, Ashlee Flick rebounded everything and Fleur Davies was starting to take control in the ruck. Morningside was held goalless for the term and Zali Cheffers kicked the Sharks to a nine-point lead at the last break.

Maddy Watt was moved forward and had an immediate impact, Emily Stewart and Georgia Eller won plenty of clearances and when Hannah Davies added her second goal, Morningside could do little to respond. Lily Mcdonald was sent to defence to shore up the win which should see the Sharks finish the season in top position.