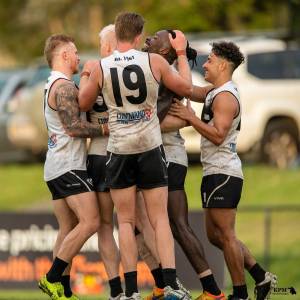 The Southport Sharks have re-signed 22 players of their 2021 VFL list so far.

Headlining the list is 2021 VFL Team of the Year members Jacob Dawson and Billy Gowers.

Named in the midfield for the VFL Team of the Year Dawson averaged 31.7 disposals and 6 tackles a game in his first season at the club.

He was also awarded the Doc Mackenzie Medal for being the club’s best and fairest player.

Dawson said he was always going to re-sign after enjoying his first year at the club.

“I love playing here, and the group we have. I’m eager to get back into it and chase the dream of being VFL premiers.”

Like Dawson, Gowers also made a huge impact in his first year at the club.

This year, Gowers kicked 31 goals in his ten games for the Sharks to be the Sharks leading goalkicker and second highest in the competition.

Gowers was named on the Interchange for this year’s VFL Team of the Year and came third in the club’s best and fairest.

Runner Up Best and Fairest, Jesse Joyce has also re-signed for 2022.

Other award winners from the Best and Fairest – Tom Fields (Wally Fankhauser Memorial Trophy), Rhys King (Ken McDonald Most Dedicated Player), and Mackenzie Willis (Most Professional Player) will also be playing for the club in 2022.

VFL Senior Coach Steve Daniel said, “to have the majority of our list from 2021 already re-signed for 2022 is fantastic. It means going into the new year; we can build on where we left off from last season, which is exciting.”

Brad Scheer is also leaving the club to focus on triathlons.