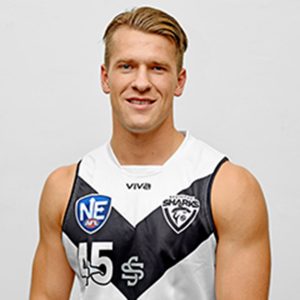 Southport Sharks is proud to announce its second Tribal Sport NEAFL Rising Star nominee of the season with defender Ethan Reeves the latest to make his mark at NEAFL level. The 20-year-old was among the teams best in their 22-point victory over Redland at Scottsdale Park on Saturday, picking up 25 disposals, six marks and four clearances through the defence and midfield. The Broadbeach product and former SUNS Academy member has not featured at NEAFL level since 2015, but hasn’t missed a beat in his return to second-tier level.

Reeves has played all 10 matches so far, and has been named among Southport’s best in five of them in a season where he’s averaging 20 disposals and five tackles per game. With a desire to play at the highest level he can, Reeves is determined to get the best out of himself this season and beyond. “I was definitely a bit out of shape at the start of pre-season, but I was lucky enough that they (Southport) gave me a shot. When they offered me a contract I was stoked,” Reeves said.

“I’m still far from the level I want to be at, but I can see the hard work starting to pay off. I’m proud that I’ve played every game so far but I’m also extremely aware I’ve still got a lot to work on and improve.”- Ethan Reeves

Reeves joins teammate and fellow defender Daniel Charlesworth as the club’s nominees for the award in 2018. The Tribal Sport NEAFL Rising Star is awarded to the most promising young talent in the NEAFL competition. Nominees must be under the age of 21 and played less than 20 senior games (excluding games as AFL Academy players) at the start of the 2018 season.