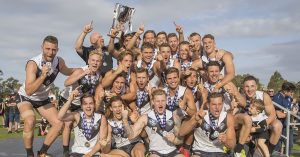 Identifying a cultural change was needed hit home at the end of 2017 for Southport Sharks football team, after finishing the NEAFL season second-last on the ladder, with only four wins.

General Manager of Football Operations, Jarrod Field, understood the challenge ahead recruiting a new Senior Coach, Stephen Daniel. With a new group of players and coaching staff coming together in 2018, a key focus was building relationships. To guide this process, Leading Teams who deliver a Performance Improvement Program, involving leadership development, team development and culture change, were consulted.

Stephen had previously worked with Facilitator, Simon Fletcher from Leading Teams with great success. Training sessions led by Simon involved players sharing stories about themselves and their interests outside of football, to create a deeper level of understanding between coaching staff and players.

It didn’t take long for the group of acquaintances to become close mates and develop a sense of ‘team’. With this deeper connection and direction from Simon, a team trademark was created.

The coaches made a collective effort to support and drive the trademark as an integral part of each player’s intention. Each Monday the trademark was used as a guide to discuss team and individual performance. Players were encouraged to engage in genuine conversation regarding areas of improvement. The coaches emphasised character over skill was a major part of each player’s selection – skill can be taught, a character cannot.

This sense of mateship led Southport Sharks to victory in 2018. Sharks finished top of the ladder and won the NEAFL Grand Final for the first time in history!

“The introduction of our trademark was pivotal for Sharks’ success as it gave the boys purpose and intention for each game. 2018 was an incredible year for Southport Sharks and I’d like to thank Simon for his support” – Jarrod Field, General Manager Football Operations.

The incredible result of the football team inspired the executive team of Southport Sharks to launch two new programs, led by Simon Fletcher from Leading Teams.

Working with the administration group, a key objective was for Simon to lead the executive and management team to identify a legacy they wanted to leave at Southport Sharks.

The team participated in a ‘Relationship Pyramid’ activity, emphasising the importance of genuine conversations to drive performance and recognise feedback. The activity reinforced the value of building strong, professional relationships.

Through a brainstorming activity, the members agreed on non-negotiable behaviours and committed to a trademark which supported the purpose and core relationships of group.

Once a sense of purpose was established, it was clear how integral this purpose was in many management functions:

“Simon has the ability to push participants outside their comfort zone, resulting in leaders not only identifying the right skills to lead others but more importantly a greater understanding of how to manage their own behaviour” – Ann-Maree O’Neill, Human Resources Manager

In the second program, a number of team members in a leadership role were selected to participate in an “Emerging Leaders” program. With Simon’s guidance, the program focused on leadership models and practical tools to assist the group to further develop their leadership skills at Southport Sharks.

A similar format was followed to the other programs with a focus on developing a trademark. This was a driver in identifying what motivates individuals participating and also as a team.

The group completed a DISC behavioural profile assessment to help them understand their own leadership and communication style, and how it impacts the team and individual performance. The group shared leadership traits they admired and identified the benefits of being a better team.

Feedback from some of the Emerging Leaders

“Simon is extremely relatable and approachable, with an ability to make you feel comfortable with opening up in order to learn more.” – Rhiannon Khan, Financial Accountant

“Simon was a supportive trainer who pushed us to come up with our own suggestions and answers, to make our newly created group, effective leaders in the future.  Going through the Leading Teams program, one of my main takeaways highlighted how to efficiently communicate with the different types of personalities in the workplace, by firstly identifying my own style which led into learning how to communicate better across the team.” – Natasha White, Human Resources & Entertainment Coordinator