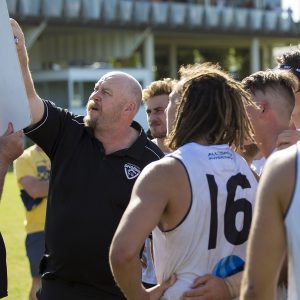 A big win on Saturday over the GWS Giants has catapulted the Sharks back to the top of the NEAFL ladder. GWS dominated the early exchanges but couldn’t manage a goal into a stiff breeze, while our conversion woes of the past two weeks were evident again early. Four straight behinds before our first major at the 11 minute mark, but from that point on, it was six goals one to zero. With the aid of the breeze, GWS again opened the quarter strongly with two early goals but Hancock steadied the ship and Baxter added another in his return to NEAFL footy. We were able to win the quarter into the wind and went to the half time break 46 points in front and well in control.

Three goals six in the third quarter did not reflect our midfield dominance. Boston, Clayton and Manteit were well on top and our pressure was again fantastic. Goals to Ford and Fyfe were a direct
result of our tackling. Although the contest was over at three quarter time, we kept our foot on the Giants throat and stormed home with six goals six into the wind to run out convincing 86 point winners. This week we host the NT Thunder who are coming off the Bye so another big challenge but an opportunity to consolidate our ladder position.

NEXT GAME- ROUND 6
Southport vs NT Thunder
Fankhauser Reserve, Southport
Saturday 12th May, 12.00pm
Live Stream all the action on NEAFL