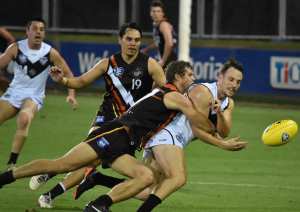 Southport have survived the toughest road trip in the NEAFL to again reclaim top spot on the ladder. Heading to Darwin to face the NT Thunder is always a daunting task, but our boys were able to overcome a 13 point half time deficit to snatch the victory.
Gun NT Full Forward Darren Ewing needed four goals to reach 600 in the NEAFL and was on fire early in the game. He kicked three in the first quarter but we had most of the play, notching up 13 more inside 50 entries and setting up an 18 point lead. Baxter kicked two but Manteit’s running goal from the boundary was the highlight, closely followed by his Jason Akermanis celebration.
NT upped the ante in the second quarter and things were getting pretty willing. We had lost the lead by the 12 minute mark as the Thunder slammed on seven goals to two to take control of the game.
13 points down at half time, Coach Steve Daniel gave the boys an old fashioned spray. Wilkinson was then moved to Full Forward with stunning results. Five goals to four points for the quarter including two in a minute from Hancock had wrested back the lead.
The last quarter was an arm wrestle. Mutu took a great mark and goaled at the 10 minute mark.
This seemed to break NT’s resolve. A fight broke out on centre wing but Davis & Taylor stood tall down back to halt any attempted comeback. Murdoch was superb holding Ewing goalless for the final three quarters and our 8th win for the season has now doubled the win tally of 2017.