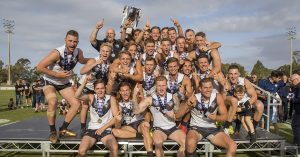 Written by Justin Lillecrapp from NEAFL.

Southport have romped to their first NEAFL premiership defeating Sydney by 55 points in a dominant display in windy conditions at Fankhauser Reserve. The Sharks took full command of the grand final contest from the opening bounce, with a six goal to one ‘premiership’ quarter setting up the 14.6 (90) to 5.5 (35) triumph. The premiership win caps off the perfect transformation for the Sharks, after finishing ninth in 2017 to achieving the ultimate glory just twelve months later. Southport co-captain Andrew Boston’s emotions were flowing as the club he played his junior football broke a ten-year premiership drought.

“Our main focus was to have 23 contributors, we knew if we had that, we would get the win.” Boston told neafl.com.au.
“It is unbelievable. When the siren went there was a fair bit of emotion – a few tears came out.
“To come from where we were last year, finishing second bottom and winning it, it is crazy.”

In just his fourth game returning from an ACL injury, Southport young gun, Cody Filewood kicked the first goal of the game just 20 seconds into proceedings giving the Sharks a perfect start in front of a healthy home crowd. A strong breeze at Fankhauser Reserve favoured Southport in the first quarter kicking to the northern end.

Southport’s bevy of small forwards hit the scoreboard in the opening quarter with goals to Filewood, Mitch Johnson and Wade Hancock. Hancock’s brilliant snap goal late in the term gave Southport a 17-point lead at the first break. Sydney did well to keep the margin from blowing out further flooding the back half ensuring a contested battle.

Southport stamped their authority on the contest with a three goal to one second quarter against the wind taking a 28-point lead into the main break. The Sharks were able to use the far side of Fankhauser Reserve in attack using the breeze to their advantage, which Sydney were unable to do in the first term. Andrew Ireland medallist Ryan Davis was the general in the defensive 50 for Southport in the first half cutting off several attacking forays from Sydney with 17 disposals, 11 marks and five rebound 50s.

James Rose was outstanding for Sydney in the first half through the midfield collecting 16 disposals, whilst captain Colin O’Riordan patrolled the back half with 14 disposals and five rebound 50s. Jordan Dawson kicked Sydney’s lone goal to half-time, his first of three for the match as one of Sydney’s better performers. Tom Wilkinson started the second half just as the first ended with a Southport goal to open a 34-point lead. Johnson kicked Southport’s third goal in the first five minutes to dominant the premiership quarter to leave Sydney with a mountain to climb to get back into the contest.

Southport players and faithful celebrated with gusto at the final siren, the club claiming their first premiership since the 2008 QAFL season. Southport ruck Jed Turner was instrumental in the victory, breaking even against NEAFL ruck of the year Darcy Cameron. Davis finished the game with 28 disposals and a huge 19 marks in a splendid display. Tyler Roos (35 disposals and 13 marks) was another outstanding performer for the Sharks through the midfield and off half back.