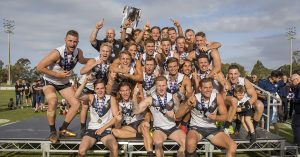 The AFL has welcomed 2018 NEAFL premiers Southport Sharks into the new VFL and East Coast competition.

In an unprecedented year, where the NEAFL competition failed to commence, the AFL announced that it would accept submissions from NEAFL clubs to join VFL clubs, creating a new competition. After careful consideration, Southport decided to apply for a licence.

Established in 1961 the club has won 23 senior premierships in the GCAFL, QSFL, QAFL, NEAFL and most recently fielded a women’s team in the QFAW (Division 1).

The new competition will include 22 teams and play 16 rounds from April to September 2021.

The inaugural season presents a fantastic opportunity for Southport to play a high standard of Australian Rules Football and also provides a direct pathway to the AFL for Queensland-based players.

General Manager of Football Operations Manager Jarrod Field is delighted with the outcome “2021 will be an exciting time for the club and is the perfect way to honour our 60th anniversary. It’s a huge challenge, and will no doubt test our ability playing in the largest competition in Australia.” said Field.

Southport welcomes back 2018 premiership-winning coach Stephen Daniel who will work closely with the club to begin the player retention and recruiting program.