GIANTS TOO GOOD FOR WASTEFUL SHARKS 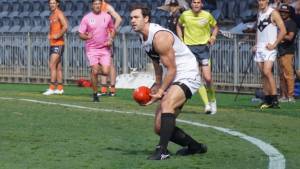 The Giants ended the Sharks winning start to the VFL, defeating the Gold Coast club by 30-points on Sunday afternoon at Blacktown International Sportspark.

The Giants looked eager from the start to make amends of their winless start to their VFL campaign.

With 12-listed AFL players, GWS led from start to finish, and every time the Sharks looked like they could mount a comeback, the Giants had an answer.

“I can’t fault the players’ efforts at all. They were hungry all game. However, our kicking in front of goal and around the ground was poor, as was our decision making.”

Although concerned, Steve knows his side will bounce back from this.

“We are a resilient and hungry group. Their ball skills are great at training. Now we have to execute in pressure situations on game day.”

Jesse Joyce, unlike a number of teammates, was very clinical with the ball in hand and was the Sharks best player.

For GWS, Jake Riccardi was a standout with 40-disposals and four tackles, putting his hand up for AFL selection.

It will be a big week at training for the Sharks as they look to bounce from a disappointing performance and defeat North Melbourne at home on Saturday.