Get to Know Money For Nothin

Home » News » Get to Know Money For Nothin 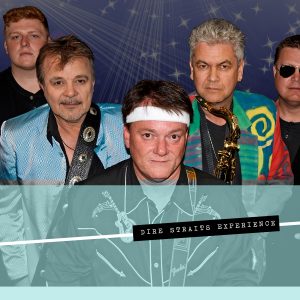 For many people during the 1980’s, Dire Straits was the quintessential rock group releasing some of the biggest hits that remain embedded in music culture to this day. Money for Nothin – The Dire Straits Experience is a 5-piece tribute band, honouring this iconic time in music. We caught up with Terry, the lead vocalist to get to know the band.

How did you get together?
After years of playing in other tribute shows I decided it was time to put together a tribute show of my favourite band, Dire Straits. I hand-picked the members based on their playing skills, experience and passion for music. Andy on bass and Ray on guitar were from previous bands I had played in, Alec on drums was recommended by Andy. I contacted Gary for the saxophone spot and he introduced me to Brad on keyboards as they have known each other for years and had played in bands together including the INXS tribute show. We got together in November 2017 and we just clicked!

What started your passion for music, Dire Straits in particular?
I have always loved music from an early age- it must be in my DNA. I grew up in an era when rock guitarists were at their peak and I have many heroes and influences including David Gilmore, Angus Young, Albert Lee and Chuck Berry – the list goes on. But Mark Knopfler stood out from the crowd for me, because he played differently, so expressive and melodic with a clean tone. And it was very hard to sound like him. It wasn’t until I figured out that he didn’t use a pick and only played with his fingers that I started to unlock the magic of playing like him. Our generation didn’t have the internet or YouTube, we had to figure these things out from listening over and over or seeing the bands live.

What’s your favourite thing about performing live shows?
Seeing the people in the crowd react to the music in a positive way. Whether they get up and dance, or smile and remember a happy time in their life, or sing along or just chill and enjoy it -it’s our reward for all the hours of practice and honing our craft. We like to think of the positive vibes we send so that people can escape their everyday lives, even if it is for just a few hours.

What’s the best way we can listen to your music?
The show is quite new and we are working on providing more content, but we showcase our music on our Facebook, YouTube and Soundcloud pages.