Sharks nominated for 2018 Gold Coast Team of the Year 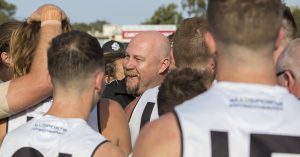 As a part of the 51st Gold Coast Sports Star Awards, Southport Sharks has been nominated to win the 2018 People’s Choice Team of Year Award.

Sports Gold Coast nominates teams throughout the Gold Coast who have won either a state, national or international competition or accolade.

“The Southport team secured their first NEAFL Flag in 2018 in a dominant grand final display over the Sydney Swans side. In front of 3000 spectators at their home ground, Sharks completed a remarkable transformation from a ninth place finish the previous year to 2018 Premiers” – Sports Gold Coast

This nomination means a lot to the club as a whole and in particular, General Manager of Football Operations, Jarrod Field.

“It would be amazing to be recognised as the best sporting team on the Gold Coast for 2018. Unlike many sporting teams who have been on the map for 2-3 years, we’ve come from nowhere… to go from 9th place to a premiership in a year is an incredible effort by the team and coaching staff alike” – Jarrod Field

Please spread the word and get voting! If you would like to vote for Southport Sharks, please visit myGC’s website.

The awards night will be held on Thursday, 21 February at Sharks Events Centre. If you would like to attend, please visit Sports Gold Coast website to purchase tickets.