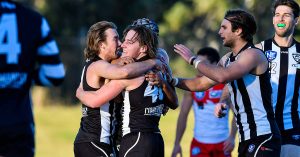 The Sydney Swans have held off a determined Southport side and run away with a comfortable 47 point win in the 2018 Grand Final rematch.

The Southport players showed some real resilience after what can only be described as a “horror” preparation for an interstate game. A cancelled flight Friday night followed by further delays on Saturday meant a highly compromised preparation compared to the opposition. Kwaby Boakye, Jai Lyons and Harry Arnold were all on debut for the club.

Jack Mentha opened the scoring with a great goal, then Ford beat an opponent and snapped truly from the top of the goal square. A late Sydney goal reduced our lead to five points at quarter time.

Sydney opened with the first three goals of the second term before Boston hit Hall lace out from 50 metres and Hall reduced the margin back to 6 points. Sydney goaled again and we were 11 points down at the half but the game was up for grabs.

The third term was goal for goal with Ford and Mutu chipping in with majors, but a Sydney goal right on the three quarter time opened the floodgates.

Six goals to one in the last quarter saw Sydney kick away to win by 47 points.