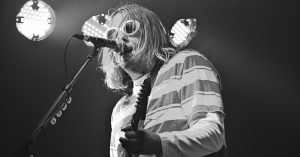 The 90’s were an era of ripped jeans and flanno shirts… the time when Grunge, Pop Punk and Brit Pop was born. Smells Like 90’s faithfully celebrates the music, outfits and the attitude of this classic decade. We caught up with the band to discuss all things 90’s ahead of their upcoming show at Southport Sharks.

What can we expect from the Smells Like 90’s Show?
A first-class production featuring the greatest hits of the 90’s from acclaimed artists such as Pearl Jam, Green Day, Smashing Pumpkins, Blink 182, The Offspring, Oasis and Blur – plus all the hits from the decade’s biggest band, Nirvana. It’ll be a high-energy, fun night out for re-living the era we all love and remember.

What do you love about the 90’s era?
The amazing music that came from this decade. After the domination of New Wave and Glam-metal in the 80’s; Grunge, Brit Pop, Punk Rock and Alternate Rock emerged and took over as the most popular music of the decade. We love the attitude, angst and emotion of this music. It’s fun to play and we find audiences can’t help but dance and rock out to these classic tunes.

How did the band get together?
The band is formed around core members and brothers, Ward (vocals/guitar) and Sol Freeman (bass). The pair have been playing, writing and touring together since 2002 and have experienced many highlights in their career including backing Angry Anderson and sharing stages with Jimmy Barnes, The Angels, Rose Tattoo, The Offspring and many more. The line-up is completed by Andre Lemberg (vocals/guitar) and Kai Browning (drums) who share a similar background of playing rock covers and originals in pubs and clubs across the country. A shared love of 90’s rock has brought the group together. The band has a ball playing all the hit songs we know and love. This passion and energy spills over to audiences creating a great vibe and memorable shows.

Catch Smells Like 90’s on the main stage on Friday, 28 September from 8.30pm. As always, this show is free and non-members are welcome to attend. There’s always something new happening around the club, check out our what’s on page to find out more.