Eclipsed by the Suns- Again 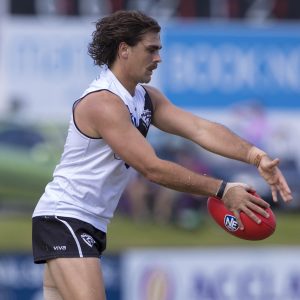 Searching for our first win against the Suns since 2014, we managed to give up a winning position and gift the Suns the four points. We dominated the early exchanges with goals to Hancock, then Dale courtesy of a great tackle by Sheers. Baxter bombed a goal from 50 and we were four goals up 16 minutes in. Two late goals from Gold Coast reduced the margin to 16 points at the first change.
The second quarter was a two goal each stalemate with the highlight being a great snap goal to Andrew Boston. Our lead extended slightly to 20 points.

The Suns took control with a dominant five goals to two third quarter. Former Shark Brayden Crossley kicked three for the term and Fitzroy Greenwool showed electrifying speed as he slotted a great goal from out wide. The game was well and truly in the balance but the Suns had the momentum. We looked gone 20 minutes into the final term but when Tape took a great mark and dished to Boston who goaled, there was still hope. Wilkinson goaled a minute later and we were back to within two points with seven minutes to go. Unfortunately, Gold Coast got out the back twice in the final minutes and goaled on both occasions. The final margin was 14 points but this was one that got away. We are back at Fankhauser again this Saturday against the top of the ladder Sydney University.