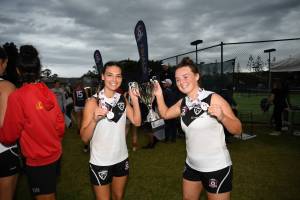 The Southport Sharks have gone back-to-back in the QFAW Division 1 competition after defeating Surfers Paradise by 10 points in the Grand Final at Bond University on Sunday.

Like last year, which saw the same two clubs go head-to-head, it was an extremely tight affair.

Zali Cheffers kicked an early goal for the Sharks but neither team were able to score a goal for the remainder of the quarter. The Sharks led by 9 points going into the first break.

The rain arrived during the second quarter and Surfers Paradise kicked a long-range goal to close the gap to just three points at half time.

They call the third quarter the premiership quarter, and that’s exactly what it was. The Sharks kicked two goals to zero –first through Bone with an exceptional out the back goal and then through Elli-Jay Beck with a nice left foot goal, extending the margin to 17 points at three-quarter time.

The rain was still very heavy. But neither team took a backward step. In fact, the contests were getting tougher and tougher, as players from both teams threw their bodies at everything. Southport kicked the first goal of the last quarter through Shaw who was fantastic for the Sharks as the margin was extended to 23 points.

Despite it being a low scoring affair, the Demons were not out of it. They kicked the next two goals to cut the margin to 11 points with six minutes left of the game. But the Sharks held on to win 4.6 (30) to 3.2 (20).

After the game, Ryan Davis said, “It is an outstanding reward for effort.”

“To reward our players, coaches and volunteers with a premiership is just fantastic.”

“I was so proud of the girls today. Their ability to win the contest and put their head over the ball was just brilliant.”

Alana McNab from Surfers Paradise was awarded best on the ground for her performance on the half backline. Madi Reisinger and Hannah Davies were the Sharks best. Reisinger starred at half-back, and Davies was electric up forward.

Overall though, it was a team effort and a great way to celebrate the club’s 60th year anniversary.