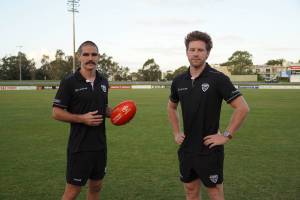 The Southport Sharks have had a bumper start to the 2021 VFL, winning four of their first five games, and are currently fourth on the ladder.

This week they take on the Gold Coast Suns in the inaugural VFL Coast Clash on Friday night at Fankhauser Reserve.

The Suns had the wood over the Sharks in the NEAFL. The last time the Sharks beat the Suns was in 2014.

So, who can win their first meeting in the VFL?

Southport’s dominance in the VFL so far has come on their ability to win the contested ball in the midfield thanks to former Gold Coast Suns, Jacob Dawson and Jesse Joyce.

Dawson and Joyce both grew up on the Gold Coast, and came up through the ranks in the academy, and then on to the Suns list.

Both understand the importance of the occasion and are looking to forward to a fiery clash under lights on Friday.

“It’s a huge night for the club. We are looking forward to the challenge and the excitement that the Coast Clash will bring,” Joyce said.

Southport are coming off two 100+ huge wins against North Melbourne (107-points) and Aspley (109-points) and will look to win their third game in a row this week.

The Suns have also had an 8-day break compared to the Sharks who will be coming off a six-day break.

Joel Jeffrey and Will Brodie will be the players to watch for the Gold Coast.

For Southport, Mitch Johnson who kicked ten last week and Billy Gowers who is third in the competition for goal kicking should be exciting to watch.

The game starts at 7 pm at Fankhauser Reserve, in what will be the Sharks first home VFL Friday night game. The game will also be live-streamed on the Southport Sharks YouTube Channel.