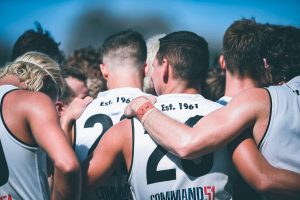 Southport’s highly anticipated first VFL fixture has been released, providing a lot of excitement for the year ahead.

With Steve Daniel’s men unable to play in the NEAFL last year due to covid, it will be great to see the team playing football again.

The Sharks new venture into the VFL begins with a trip to Melbourne in Round 1 to take on the Carlton Football Club at the Blues spiritual home Ikon Park on April 17.

Southport, not foreign to travelling interstate to play, are scheduled to travel to Melbourne four times and once to Sydney.

The rest of their games will be played in Queensland, with 8-games to be played at Fankhauser Reserve.

Aspley will travel down the highway in Round 2 for the Sharks first home game since the 2019 NEAFL Grand Final.

Victorian clubs – North Melbourne, Northern Bullants, Box Hill, Werribee and Frankston are all fixtured to travel up to Fankhauser Reserve this year, which will be a great opportunity for Queensland footy fans to experience the VFL.

“There are going to be some strong opposition sides that travel up here, which will provide a great spectacle, especially when sides with a big following like the Box Hill Hawks and North Melbourne come to play.”

Field is excited about the year ahead, but he also knows it is a big challenge moving from the NEAFL to the VFL.

“We’ve been a successful club in Queensland footy and in the NEAFL, but now we get to test ourselves against some of the most successful clubs in Australia. It’s going to be tough, but we have done everything we can to prepare for this challenge.”

Overall, Field is happy with the fixture and can’t wait to travel down to Melbourne for Round 1.

“It’s going to be great to be playing in the heartland of footy and against some of the powerhouses of Victorian footy.”

“Travelling down to Melbourne does not hold any fear for us. We look forward to the challenge and testing ourselves!”

“We obviously had to travel for the NEAFL, and we feel like we know what to expect from an off-field sense and how to prepare best.”