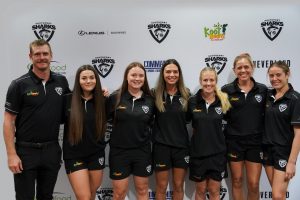 The Southport Sharks are pleased to confirm that the women’s captains for 2021 will be Hannah Davies and Elli Jay Beck.

Hannah Davies was the 2020 premiership captain for the club in the women’s inaugural season, and Elli Jay Beck who is a Southport junior joins her as co-captain this year.

Ashlee Flick, Madi Reisinger, Georgia Eller and Elizabeth Halsall will also be in the leadership group.

QFAW Coach Ryan Davis is really happy with the leadership group that the girls voted for.

“All the girls show a lot of professionalism and hunger and all deserve a position in the leadership group.”

“I’m really excited about the year ahead, and these ladies are going to hold this club in really good stead.”

The group was announced at the 2021 Season Launch on Tuesday Night in front of patrons, sponsors and the board ahead of their season opener against Morningside on May 1.