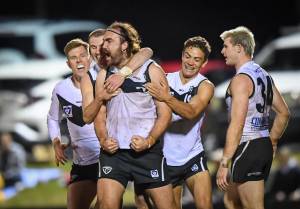 The Southport Sharks VFL team have won their last eleven games at home after defeating the Sydney Swans by 22 points on Friday Night.

The Sharks were challenged by the Swans, especially in the second quarter.

Southport kicked the only two goals of the opening quarter, but the Swans hit back in the second.

The Swans led at halftime by a point on the back of a fifteen-minute period of dominance in the second quarter.

After the game, Southport Coach Steve Daniel said, “It was important to stay calm at halftime. We were doing a lot right, we just had to keep working hard.”

The Sharks were much improved in front of goal in the third quarter and took a handy 11-point lead into three quarter time.

The Swan’s goal two minutes into the last quarter reduced the margin to just five points. It was game on!

Brayden Crossley was the star of the show.

His fellow ruckman Fraser Thurlow left the field in the first minute of the game due to a hamstring injury, so he was required to take on a more significant load.

Boyd Woodcock was also a star. He had 25 disposals, six marks, eight clearances, two goals, and his mark in the final quarter was unbelievable.

Jacob Dawson (29 disposals and seven clearances) was good, as was former Sydney Swan Zac Foot (23 disposals, six marks and one goal) in his first game back since injuring his foot.

This week, Southport play Essendon at home at 12:05 pm on Sunday.