Shark Showdown I – A Special Day for the Davies Family 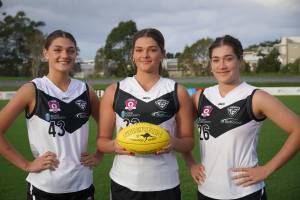 It will be a special day for the Davies family at the Shark Showdown today when Southport takes on Bond University in Round 8 of the QAFLW.

Sisters Darcie (16), Fleur (18), and Giselle (19) will be playing together in the Southport Sharks senior team for the first time.

Their younger sister – Georja plays Under 15’s at Southport.

Darcie said, “I’m so excited to get an opportunity to play in the senior team, and it’s pretty cool to make my debut with my sisters.”

It is already a big achievement for Darcie to make her senior debut at 16 years of age, but to make it even more incredible, she has been balancing her football with her Gold Coast Titans Netball duties.

Older sister Giselle said, “Darcie is an amazing athlete. I don’t know how she does it all, but I’m so impressed that she can do both and get her schoolwork done.”

Giselle who has kicked 10 goals for the Sharks this year said she is so excited for today’s game against her old club.

The Gold Coast Suns AFLW listed player said, “It’s a big game, and I’m so excited to play with my sisters again. It’s been over a year since we last played together and I’ve missed it!”.

Fleur echoed her sentiments, saying, “it’s so special to play QAFLW at Sharks because this is where our footy journey started, and it’s even more special to be playing with my sisters.”

She hopes to join her sister on an AFLW list later this year, and she helped her chances with a fantastic Under 18 state carnival earlier this year.

Selected in the U18 NAB Academy side, which took on the Under 23 all-stars at the end of the carnival, Fleur dominated with 28 hit outs.

Alongside fellow Shark Alana Gee, who was Queensland’s MVP of the Under 18 State Carnival, Fleur will participate in the draft combine later in the year before the draft, which will take place on the 29th of June.

Unfortunately, due to wet weather, the match has been postponed to a later date.