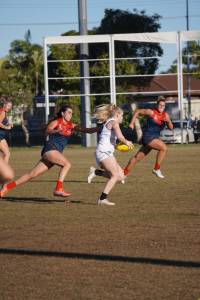 Southport’s women’s team has won the QFAW Division 1 minor premiership after it was announced by AFL Queensland last night that due to Queensland Government’s current community sports restrictions in South East Queensland, there will be no more QFAW Division 1 home and away games played in 2021.

AFL Queensland said in yesterday’s statement,” Throughout the COVID-19 pandemic, AFL Queensland continues to be guided by the direction of the Queensland Government.  The health, safety and wellbeing of our football community; players, officials, supporters, volunteers and everyone involved in our game, remains our highest priority.

With the risk of further restrictions prohibiting community football, extending a competition’s season heightens the risk of not being able to complete a finals series and we want to see a premiership awarded in each of our competitions.

In determining a position regarding the remainder of the community football season and finals series, a number of factors and implications were considered in the best interest of the game. As such, some finals series formats have changed based on the number of weeks available to play leading into the fixtured grand finals. Where there was no forced requirement to amend a finals series, they remain as is.”

The revised QFAW Division 1 finals series can be seen below: