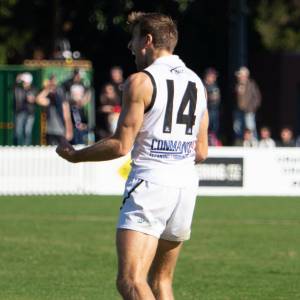 The Southport Sharks have defeated Port Melbourne by 63 points on a sunny day in Melbourne on Saturday.

Southport led by 1 point at quarter time, as Port Melbourne did a great job winning the ball at the contest and keeping hold of it.

Sharks’ Coach Steve Daniel said after the game, “Port Melbourne were terrific in the opening quarter. We needed to some tweaks at quarter time and focused on improving our defence.”

Southport’s second quarter was much better. They started to move the ball a lot better and kicked six goals to nil for the quarter.

Boyd Woodcock’s tackle pressure was immense in the middle and he was the Sharks’ best player.

Down back, Callum Searle played well against his old side, Max Spencer didn’t let anything go past him and Rhys Clark continued his excellent form with another quality performance.

This Saturday at 12:05 pm at the Austworld Centre Oval, Carrara, the third placed Southport Sharks take on the sixth placed Brisbane Lions in what should be a great game of football.