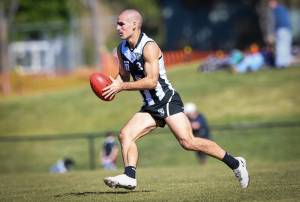 In front of many past players and a host of juniors, Southport defeated Sandringham by 44 points at Fankhauser Reserve.

Southport celebrated its Heritage Round on Saturday and wore special guernseys to mark the occasion.

Sandringham kicked the first goal of the game before the Sharks steadied and took control of the game.

Southport kicked the remaining four goals in the first quarter to take a 21-point lead into quarter time.

It took a little while for the Sharks to respond, but they eventually did.

The Sharks kicked three goals in as many minutes midway through the second quarter to extend the lead past five goals.

From there, the Zebras were playing catch up. The Sharks kicked six goals to two in the third quarter to lead by 57 points at three-quarter time.

Sandringham reduced the margin in the last quarter to keep the final margin below 50 points.

Daniel said, “Sandringham is a powerful club. They are good at hanging on to the ball, so we wanted to put as much pressure on them as possible. I think we were able to do that which was pleasing.”

Attention for the Sharks now goes on to the Northern Bullants, who they are playing at 12:05 pm this Sunday at Preston City Oval.

Daniel said, “We are excited about heading to Preston this weekend. There is so much history and tradition down there.”

“They may be last on the ladder, but it will not be an easy game.”

“On their home deck, they will be up and about to try and knock us off. So if we don’t prepare and have the right mindset, they will.”