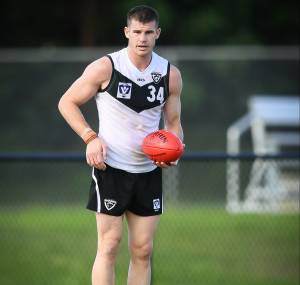 The Southport Sharks are now second on the VFL ladder after defeating the Brisbane Lions by 36 points on Saturday at the Austworld Centre.

The Lions won the first quarter by a point, as they were able to win contested ball and get the ball inside 50.

Southport Coach Steve Daniel said, “We needed to make some tweaks at quarter time, but once we did, I was pleased on how we were able to open the game up.”

The Sharks kicked six goals to two in the second to set up a 22-point halftime lead and were able to keep that momentum in the second half kicking eight goals to four.

Daniel said, “It was a great win. Brisbane is a quality outfit and it was a big challenge to beat them, but we were up to it, which is pleasing.”

It was a great dual between the Lions’ Rhys Mathieson (37 disposals) and the Sharks’ Jacob Dawson, who were the two best players on the ground.

Jay Lockhart continued to show his value at both ends of the ground, playing forward and back during the game, finishing with 24 disposals, 13 marks and a goal.

Rhys Clark, who has been tremendous for Southport this year, left during the game via ambulance due to an elevated heart rate, but the club is pleased to say he has fully recovered.

Southport has a bye this weekend before a big home game against Sandringham.