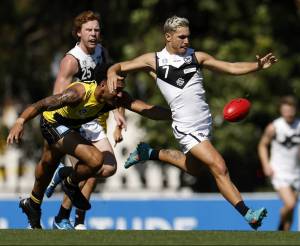 The Richmond Tigers have defeated the Southport Sharks by 31 points in Round 1 of the VFL at Punt Road on Sunday Afternoon.

Jacob Townsend kicked three goals in his return to Punt Road, but the day ultimately belonged to the Tigers, who outclassed the Sharks 16.4 (100) to 10.9 (69).

It was a hot day in Melbourne, and the Sharks were off to a hot start, thanks to Jacob Townsend who kicked the first two goals of the game.

The home side steadied shortly after, though, kicking the next three.

Late in the opening term, Townsend kicked his third goal to ensure the Sharks trailed by the smallest of margins at the end of the first quarter.

Williams kicked a quality running goal for the Sharks to peg back the Tiger’s lead, but it did little to hault their onslaught.

Richmond piled on three more goals in the second quarter to lead by exactly four goals at half-time.

Southport Coach Steve Daniel asked his players to lift their intensity at half-time, and they did. However, so did the Tigers.

Richmond’s pressure was immense punishing Southport for overusing the ball.

Southport had 126 disposals more disposals than Richmond and twelve more clearances than the Tigers.

The stat that tells the tale the most though, is that the Tigers had seven more inside 50s.

Another area that didn’t help the Sharks was that they missed some goals at crucial moments in the game, whilst Richmond was very accurate in front of goal.

At three quarter time, the Tiger’s lead was 39 points. At the last change, Daniel’s message to the players was to take the game on and see if they could pull off an impossible win.

The Sharks could not pull off a fairy tale win like in Round 1 against Carlton last year. However, they were able to reduce the final margin to 31 points.

The individual’s stat sheet didn’t look bad for the Southport Sharks, with nine of the ten most possession getters on the field were wearing black and white.

At the end of the day, the Tigers led where it mattered most, the scoreboard.

After the game, Head Coach Stephen Daniel said, “it was a tough game. Richmond at Punt Road, it doesn’t get much tougher than that.”

He went on to say, “there were a lot of good things, but there are a lot of things we want to improve on.”

“Richmond’s pressure was elite, and we found it hard to progress the ball forward. We overused the ball, we turned the ball over a lot, and missed opportunities in front of goal, which was frustrating.”

Daniel emphasised that although the club is disappointed with the result, they are ready to make amends in Round 2 at home against Williamstown.

“We have a few errors to work on, which will we review, but now it’s all about picking ourselves up and getting ready for the week ahead.”

Daniel revealing, “Our focus will be on making the most of our opportunities, because if you don’t make the most of them at this level, it kills you.”

It will be a big game for the club, as it will be the first time the club has held a triple header with the women’s teams.

The VFL team will start the day playing at 1:05 pm, with the women’s teams playing Coorparoo later in the day. Seniors at 4 pm and the Reserves will play at 6 pm.