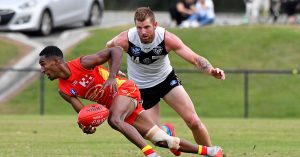 The Gold Coast SUNS have helped themselves to an upset win over Southport at Fankhauser Reserve on Saturday. Defying all recent form and the respective ladder positions going into the game (2nd vs 9th), the SUNS led from go to whoa in a performance Coach Steve Daniel described as “our worst of the year”.

The writing was on the wall early when Crossley marked and goaled 30 seconds into the match, then a Davis mis-kick handed the Suns a second goal a minute later. The SUNS then goaled from a set shot and we were 18 points behind inside five minutes.

Jamison Shea finally got us on the board courtesy of a free kick, Charlie Ford kicked a great running goal and Tyler Roos then snapped truly, keeping the margin to only 11 points at quarter time.

The second quarter was a real slog with plenty of stoppages and not a lot of scoring. Jed Turner kicked our only major for the term after some clever footy from Lee Dale, but the Suns managed two goals for the quarter and the extended their lead out to 18 points at half time.

With Halland Stubbs not available for this game, Coach Steve Daniel sent Ryan Davis forward hoping he would hit the scoreboard and get us back into the contest. Unfortunately, most of the play was at the other end and the SUNS added three more goals.

Facing a 29 point deficit at three quarter time, we needed to score quickly to be any chance of winning. Ford then Shea both kicked goals and the difference was only 22 points but Crossley answered for the Suns which put paid to any hopes of a miraculous comeback. Late goals to Turner and Bowie reduced the final margin to 15 points.