Southport Sharks to field first senior women’s side in 2020 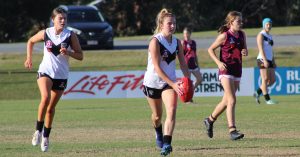 AFL Queensland have formally advised the Southport Sharks of their entry into the 2020 QFAW Division 1 competition.

“They put forward a very professional pitch to be in the Division 1 competition and we have no doubt they will quickly develop an excellent women’s program.”

Southport Sharks CEO, Dean Bowtell, was delighted with the news of his club’s entry into the QFAW.

“Since 1961, the Southport Sharks have promoted and fostered the growth of Australian Rules Football on the Gold Coast,” Mr Bowtell said.

“This announcement complements our mission and provides a pathway for the 80 junior girls currently playing at the club.”

“We are planning new facilities to enhance the football experience for all female participants.”

“This is a historic day for the club” – Dean Bowtell, Southport Sharks CEO.