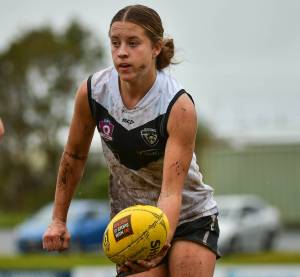 Bond University defeated the Southport Sharks QAFLW senior team by five points in the second edition of the Shark Showdown at Fankhauser Reserve on Saturday.

It was the second week in a row of the Shark Showdown, but unfortunately, the Sharks couldn’t back up their performance from last week’s game this time.

After the game, Southport Coach Ryan Davis said the group was disappointed with the result.

He said, “It was a scrappy affair, and it was a purely contested game of football. Unfortunately, our contest wasn’t where it needed to be.”

Bond University kicked the first three goals of the game. The first one came in the first 60 seconds of the match.

It was always going to be a tough ask for the Sharks, who were goalless in the first half, to come back from 18 points down at half time. However, they gave it a go.

Davis said, “At half time, we spoke about surging the ball forward and that we wanted to be in touch at three quarter time, which we were able to do.”

Meg McGuiness, who moved from defence to the forward line, kicked Southport’sSouthport’s first early in the third quarter with an excellent soccer goal.

Georgia Eller then kicked the Sharks second goal late in the third quarter to bring it back to five points, with just over a quarter to go. It was game on!

Both defences stood firm in the last quarter, though, and neither team could score, meaning Bond University finished 3.3 (21) to 2.4 (16) winners.

Davis said, “We felt like it was a game that got away. We had opportunities to win, but we couldn’t get it done.”

Southport is still on top of the ladder, with two games remaining in the home and away season.

This Saturday, the Sharks play UQ, who are second. The game will take place at UQ Playing Field 2.

The Sharks looked good early. They kicked the game’s first goal, which came early in the second quarter from exciting youngster Caitlin Miller. It was her first game back since injuring her knee a couple of months ago.

Bond University kicked three goals in a row in the second quarter, which ultimately was the difference between the two teams. The Bull Sharks defeated the Sharks (30) to 2.0 (12).

After the match, Southport Coach Mal Smith said, “Bond had a bit more speed than we did and was a huge reason they were able to get the ball moving forward.”

“Once they kicked those three goals in the second quarter, it was always going to be tough to come back from there, and it proved to be, unfortunately.”

Smith was proud of the way the team didn’t give up until the end, though.

Meghan Sullivan in the midfield and Indira Maradani down back played well.

Taylor Gregory kept her record of kicking a goal in every game this year after she kicked a goal in the last quarter.

This Saturday, the Southport Sharks play the University of Queensland on UQ Playing Field 2 at 6:45pm.