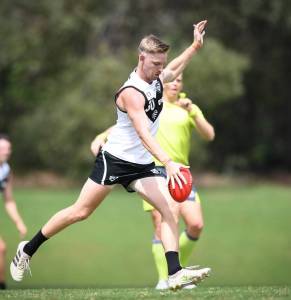 The Southport Sharks have finalized their VFL list for 2022, which features twenty Queenslanders.

Sharks’ General Manager of Football – Jarrod Field is very happy with the list which he believes has a great spread of youth and experience.

“A large part of the list strategy was to retain majority of our players from last year, which we were successfully able to do,” Field said.

“We try and create an enjoyable environment for our players. We have a club full of good people and quality coaches, which helps create that positive environment and I think it is a significant reason players want to keep coming back.”

He believes having 20 players on the list who hail from Queensland is great for the game in the Sunshine State.

Included in that twenty are Max Spencer and Jacob Heron, who have returned to Queensland after stints of playing VFL football in Melbourne.

The club also prides itself on helping restart players’ lives who have been delisted from AFL lists.

“It’s great to have former AFL listed players on our list. We want to help them regain their passion for the game and help them transition into life after playing professional football,” Field said.

There are plenty of Southport players who still want to get drafted, especially in the club’s development list (Under 22).

This year the club has a Development Coach who is focused on the players who are on the list who do not make the VFL team.

Field saying, “We are really excited to have Scott Mathers on board this year as our Development Coach, which will help our younger players improve their game.”

The club has six players on the development list who were part of the Gold Coast Suns Academy, two of which have played for the Southport Juniors – Harrison Rowles and Sam Hilton-Joyce.

The Southport Sharks will begin their season against the Richmond Tigers VFL team on Sunday 27 March at 11:35 AM AEST at Punt Road Oval.