SOUTHPORT ARE INTO BACK-TO-BACK GRAND FINALS 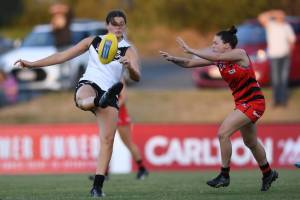 The Southport Sharks women’s team are through to the QFAW Division 1 Grand Final.

QFAW Head Coach Ryan Davis, after the game saying, “it’s a huge reward for effort, and (he) couldn’t be prouder to see the girls back playing in a Grand Final.”

They will face Surfers Paradise for the second year in the row, after defeating the Burleigh Bombers by 22 points in the preliminary final on Saturday Afternoon.

Southport started fast. They kicked the first two goals of the game. However, Burleigh bounced back kicking the next three to lead by 4 points at Quarter Time.

The Sharks were up by 11 points at three quarter time. Despite the Bombers best efforts in the last, the Sharks were able to extend their lead kicking three goals to one.

Captain Hannah Davies led the way in front of goal for the Sharks kicking three goals, and Britt Brymer finished with two.

Maddy Watt was her usual self, winning the contested ball and feeding it to fellow teammates.

Ashley Flick showed her composure and leadership in the high pressure game, and Abbie Pluples was also very good.

Davis was proud of his whole team though, saying championships are won by champion teams, not a team full of champions.

“We need to work well as a team. We were able to do that today, and that’s what we will be aiming to do next week.”

The Grand Final will be at Bond University on Sunday the 5th of September at 2:30pm.