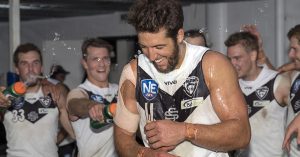 Southport have hung on to win a classic encounter with Aspley yesterday at Fankhauser Reserve. The inclusion of New York giant Alex Aurrichio tipped the scales in Southport’s favour against the Hornets.

Kicking with the wind in the first quarter, the Sharks dominated the territory battle but was again wasteful in front of goal kicking three goals and five behinds.

Conversely, Aspley converted every shot during the first half and was only eight points behind at the main break.

Aspley edged ahead just after half time but for the second week in a row, clever forward Trent Stubbs stepped up for the Sharks and kicked three goals during the third quarter as five unanswered goals opened up a 26 point lead at three quarter time.

Aspley were not done with though and they mounted another challenge. The Sharks lost Mackenzie Willis to an ankle injury and sent Josh Hall to play as an extra defender as Aspley had 11 shots on goal for the quarter but couldn’t convert enough to bridge the gap. The boys held sway by 11 points at the end of a high quality NEAFL match.