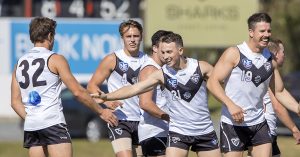 Southport have held onto the all important top spot on the NEAFL ladder after a comfortable win over the NT Thunder in Darwin. In what loomed as a danger game, the Sharks were switched on from the first bounce and blitzed their rivals in the opening half of the game. We opened the game with an extra defender and the tactic paid immediate dividends. A Scarlett like toe-poke from Turner resulted in a Hancock goal and then Johnson added 2 more in 5 minutes. A further goal to Wilkinson opened up a 22 point lead at the first break.

The game was broken wide open in the second quarter as the Sharks slammed on nine goals to no score. Boston kicked three goals for the term and returning young gun Cody Filewood added two more as his 17 team mates ran to congratulate him. The lead had stretched to 81 points by half time and the contest was well and truly over. Despite the big lead, Jack O’Shea had come to play and opened the third term with a huge tackle on opposing Captain Cam Ilett which resulted in a goal to Josh Hall. O’Shea then created a goal for Manteit as the lead hit a game high 93points.

An 88 point three quarter time lead allowed for Boston, Taylor and then Davis to be rested late in the game. The only negative from the match was an ankle injury to Josh Hall who may miss next week’s clash with Redland. A win will give us a week off and a home Preliminary Final so the stakes are huge!

Southport Colts vs Caloundra, 11.15am