Sharks put Demons to the sword | Shark Tales Round 10 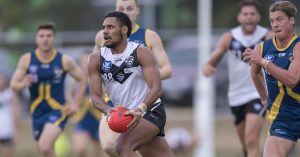 The game began with neither side bothering the scorer until the 11 minute mark when Trent Stubbs managed a behind after returning to the field following a dislocated finger. Jed Turner finally managed the first major at the 15 minute mark and Josh Hall followed soon after to set up an eight point quarter time lead.

The tall forwards dominated again in the second term as goals to Fields, Turner and Stubbs saw the Sharks maintain the eight point lead at half time. Coach Steve Daniel asked for an improvement in defence and with disposal. The players could sense the urgency of the situation.

The next 30 minutes were some of the best we have played this season. Despite the loss of Trent Stubbs to an ankle injury during the term, we managed to slam on seven unanswered goals for the quarter, including two bombs from Clark and Fields, both  from outside 50. The lead had been extended to 53 points at the last change and the contest was effectively over.

Josh Hall extended the lead to 60 when he goaled early in the last quarter and that is where the margin stayed.

The back line was brilliant all day, restricting the Demons to only six goals for the game. This result has enabled us to pinch a two game break in second spot on the NEAFL Ladder.