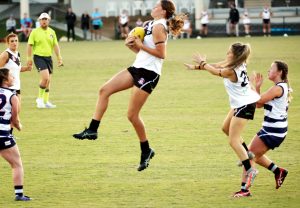 Southport have extended the winning streak to four after our QFAW team held off Broadbeach in a thriller on Saturday night at Fankhauser Reserve.

Played in reasonable conditions, the game turned into a dour defensive battle in which neither team troubled the scorers in the final term.

Elli-Jay Beck kicked the only goal in the opening stanza after laying a great tackle which was duly rewarded by the umpire.

The Sharks extended the halftime lead to eight points courtesy of a long bomb from Beck once again but dropped marks and ill-discipline were costing the Sharks and keeping Broadbeach in the game.

Elli-Jay Beck added a third goal off the deck to put the Sharks 15 points in front but a late third-quarter lapse saw Broadbeach add two goals in as many minutes to storm back into contention. The lead was only two points at the last change and it was game on.

In similar fashion to the 2020 Grand Final, the ball spent an inordinate amount of time in our defensive 50 but the girls showed great composure and took some telling marks to continually defy Broadbeach of match-winning opportunities. Madi Reisinger’s last term was outstanding and Broadbeach could not find a way to win a remarkable game of footy.

We front up at home again this week when we host Mt. Gravatt and look to push for a top two ladder position.