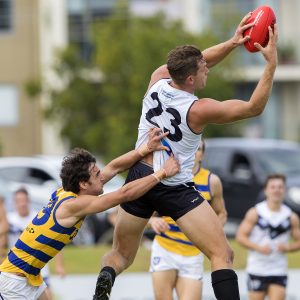 Southport have pulled off one the season’s biggest upsets with a comprehensive thrashing of top side Sydney University.

Going into the match with six changes from last week, we were searching for our first win against Uni since 2015. It is well recognised that Sydney Uni are the best non-AFL side in the competition and this would be a huge challenge.

The early exchanges were very physical and Uni had two players on striking charges by quarter time. Our boys kept attacking the footy hard and the goals started flowing. Noa Corbett kicked two goals for the quarter in only his second NEAFL match and we found ourselves 44-points up at quarter time.

The expected Uni revival did not eventuate during the second quarter as the returning Mitch Johnson was reaping the benefits of some elite forward pressure from our smalls and we had kicked away to lead by 65 points at half time. Sydney Uni had two players off injured by the half and looked completely shell shocked by what was unfolding.

There was no let up after half time as Clayton, Boston and Manteit were dominating the middle of the ground and Uni had no answers. They finally posted a goal 24-minutes into the last term, just as the Josh Hall show was beginning in the opposite goal square.

Make no mistake, this was an amazing performance!