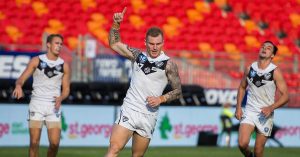 Southport have again come from behind to snatch  victory in what was an ugly game of football yesterday at Redland’s Scottsdale Park. The game saw the return of 2018 Premiership duo Ethan Reeves and Rob Clements, along with Tom Fields.

We looked switched on early in the game when Trent Stubbs goaled twice and Josh Hall added another in the first 12 minutes, but from that point on the goals certainly dried up. Rhys Clark was dominating inside our defensive 50 but Redland kicked the final two goals of the quarter to reduce the margin back to seven points.

We started the second term well and when Lee Dale goaled courtesy of Timakoi Bowie’s pressure, the Southport lead was back out to 15 points. The final 20 minutes of the quarter belonged to Redland though, as they added three goals to take a slender  lead into the half time break.

Coach Steve Daniel was not impressed and asked for a lift from numerous players at half time. These requests seem to fall on deaf ears as we then produced a goalless third quarter as Redland extended the lead to 10 points at the final break. We had only managed one goal in two and half quarters and this game was in danger of slipping away.

We needed a spark to get us going and Tom Fields stepped up to the plate. Awarded a free kick just  outside 50, he unleashed a huge bomb which sailed through and the Redland lead was cut to four points. Minutes later, some clever stoppage work from Roos resulted in a mark to Stubbs. He duly goaled and regained the lead for the Sharks.

Redland then missed a string of set shots and when Stubbs kicked his 4th after some smart play by Johnson, the lead was enough to ensure a win.